HomeBlogNewsThe alternative propulsion meeting for a carbon-free future for yachting

The alternative propulsion meeting for a carbon-free future for yachting

Tuesday 3rd May 2022. As the 5th Monaco E-Prix and Salon Ever ends in the Principality, both focused on sustainability and renewable energy, the Yacht Club de Monaco has extended its lead in the search for eco-friendly solutions as it gears up for the 9th Monaco Energy Boat Challenge 4-9 July 2022. Held under the aegis of the collective ‘Monaco, Capital of Advanced Yachting’ umbrella brand and bringing together a new generation of engineers, Monaco Energy Boat Challenge intends to play its part in meeting the 21st century’s energy and environmental challenges. It is doing this by promoting innovative solutions for recreational boats, particularly in the propulsion and alternative energy field. Since its launch in 2014, the event has gone from strength to strength establishing itself as the international rendezvous for tomorrow’s yachting. For this edition, more than 35 teams, including 27 universities will represent 20 nationalities in the Principality.  “We want to build the future through an eco-responsible societal prism that cares about  future generations. The yachting industry cannot evolve if it does not incorporate the sustainable development concept into all its initiatives,” says YCM General Secretary Bernard d’Alessandri.

Alongside countries like Indonesia, Monaco, France, Greece, Italy, Portugal, United Arab Emirates, Peru and China with the Hainan Institute of Electronics, Canada and India are making their first appearance since the event started. These two nations will be represented by students from the Montreal Polytechnic and Kumaraguru College of Technology. Organised in partnership with the Prince Albert II of Monaco Foundation, with support from Credit Suisse, BMW and SBM Offshore, as well as Dutch shipyard  Oceanco, the Monaco Energy Boat Challenge powers creativity and stimulates innovation. With registrations confirmed for the Solar and Energy classes, it is the turn of non-CE regulated prototypes and hydrogen in the Open Sea Class to finalise their registrations, while CE ratified boats have until 1st July. The meeting is backed by many supporters including Bertrand Piccard, founder of the Solar Impulse Foundation: “I’ve been the godfather of this event for several years and have seen how it’s evolved. In the beginning, it was a bit anecdotal, the boats not being that professional, as it was just the start of those pioneers trying to do something with alternative energy sources. Yet now, after nine years, it’s become marketable! Boats are now on the market. It’s clearly a new phase and the message is simple: bravo to you all for what you have accomplished and keep it up for the future”. 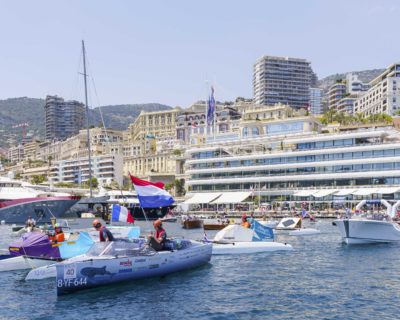