HomeBlogNewsMonaco an incubator of maritime innovation to protect the environment

Monaco an incubator of maritime innovation to protect the environment

Friday 7th May 2021. While eco-friendly vehicles and renewable energy sources are in the spotlight this week in the Principality of Monaco at the EVER show, and electric single-seaters vie for pole position in the 4th E-Prix, the Yacht Club de Monaco is ramping up preparations for the 8th Monaco Energy Boat Challenge (6-10 July 2021). “It is still possible to be a pioneer thanks to all the new sources of energy and technology available to protect the environment. The Monaco Energy Boat Challenge is an example. The organisers and participants are writing a new page of history,” said Bertrand Piccard, founder of the Solar Impulse Foundation and event patron, while in Monaco. With 60 days left to the start of this eighth edition, industry players and a new generation of engineers are gearing up to unveil their prototypes and the shape of yachting tomorrow.

Across three classes, 31 teams, 24 universities and 17 nationalities have already confirmed their participation.  Italy, France, Netherlands, Monaco, Portugal, England, Greece and Germany, but also United Arab Emirates, Indonesia, China and Peru will be represented at this unique event that gives free reign to the creativity of researchers, academics, future engineers, inventors and professionals in the yachting and energy sectors. For explorer Mike Horn it’s an important meeting: “Organising events like this one to discuss and progress ideas is to make dreams come true. When you are inspired, you inspire others and that is the start of a better future.”

Contestants in the Solar class which expects some 15 teams from all over Europe, have until 15th May to confirm their registration. Idem for teams in the Open Sea class which includes two Monaco-based teams, namely Vita Yachts and Lanéva celebrating two years since the launch of their first boat, an event attended by YCM President, HSH Prince Albert II of Monaco.

In the Energy Class, introduced in 2018 and which this year numbers 17 teams including SBM Offshore E-Racing Team, contestants use catamaran hulls supplied by the YCM. Each team has to select a renewable energy and design a propulsion system, the only restriction being that they can only use a pre-stipulated quantity of energy. In from the start at the first edition in 2014, the Solar Class is for boats powered only by the sun which compete in one-on-one duels, a slalom contest and endurance races. Last year, in the first ever wholly online event due to the health situation, six teams entered including the Dutch Tu Delft team, winners of the Spirit Prize. Around 15 boats from all over Europe are expected this year. Formerly called Offshore Class, the renamed Open Sea Class is mainly for vessels already on the market or about to enter it. They face several challenging events to test their boats’ autonomy including a 16 nautical mile (29.6km) race from Monaco to Ventimiglia in Italy, an endurance course and a manoeuvrability challenge. For electric or hydrogen boats already on the market or in development, this event is a sea trial like no other and gives professionals attending an opportunity to keep their fingers on the pulse of the latest advances.

Hydrogen a new source with a promising future

Hydrogen will take centre stage at the 8th Monaco Energy Boat Challenge. The European Commission has also announced objectives to develop green hydrogen, with a first date set in 2024 by which time green hydrogen production should have reached a million tonnes. For 2030, the target is to exceed 10 million. This ambitious road map relies on a revolution in the energy system. To date, eight teams have already announced that their project promotes this solution. They include SBM Offshore E-Racing Team which won the Innovation Prize in 2019 and the Eco Conception Prize last year. They are returning for their third crack at this event and will face five other teams including newcomers Team Altran (Groupe CapGemini). It’s an unstoppable solution with the wind in its sails according to Gunter Pauli, economist, ecologist and the man behind the blue economy: “Hydrogen is the only energy we can consider. Its performance compared to a battery or to a diesel engine, even compared to electricity (…), hydrogen surpasses them all”. In partnership with the Prince Albert II Foundation and Energy Transition Mission, on Friday 9th July the Yacht Club de Monaco is holding the Monaco Hydrogen Working Group’s second round table. This initiative brings together institutions and those involved in hydrogen projects to discuss its potential in the maritime sector. A reminder that the first round table was held at the YCM in 2019, on the opening day of the Monaco Energy Boat Challenge, and led to discussions on possibilities of installing the necessary infrastructure for hydrogen in the Principality.

Exchanges between universities and the yachting industry are always very constructive. The team of Hydrovinci and FinX, a young start-up which uses bio-mimetics for its propulsion system, is an excellent example and have been working together since 2019. Another team, French Wave Estaca who won contests on the water in 2019, return this year to trial their vertical ADV Tech axis. The annual one-day conference is on Thursday 8th July when experts in the sector meet to delve into the detail of a wide range of topics such as development of bio-composites in yachting, new energy uses, alternative propulsion systems, design and build efficiency, and the latest R&D advances.

It is also the day chosen for the Yacht Club de Monaco to sign a national energy transition pact, a Monaco Government programme combining actions on three major carbon issues: mobility, waste and energy. Meanwhile, YCM continues the transition to cleaner energy sources for its fleet, replacing conventional fuels with a 100% sustainable eco-circular synthetic biofuel. It is produced from refining waste cooking oils and can reduce carbon impact by 89%. The Club’s current committee boat Seabus was the first vessel in the YCM fleet to make the switch, followed by the Club’s flagship Tuiga. This initiative follows the arrival of three electric tenders to supervise sailing pupils in the Sports Section, and launch of the Superyacht Eco Association (SEA) Index, a benchmark to measure the environmental impact of 40-plus meter yachts. 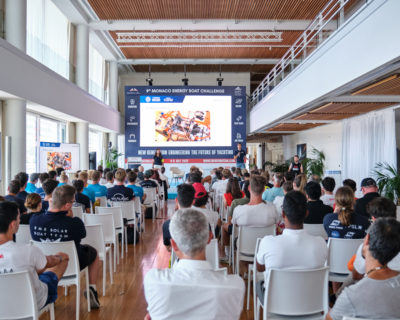