Thursday 7th July 2022. The 38 teams in competition at the 9th Monaco Energy Boat Challenge have just completed their first contests on the sea while ashore there was a full day conference, Energy Transition in Yachting: Opportunities and Limits. Today, also saw the Job Forum in action, putting young engineers in contact with professionals at informal meetings between tomorrow’s talents and today’s industry players. For all participants, be they engineers, exhibitors, or industry players, it was down to business after the pomp and ceremony of the opening the day before on Yacht Club de Monaco’s top deck, a vessel that is on course for an eco-responsible future. YCM President HSH Prince Albert II of Monaco made a point of touring the Paddocks and Village of this event which he has supported since its launch in 2014. “A century after the first powerboat meetings in Monaco, we continue the adventure,” said YCM General Secretary Bernard d’Alessandri. “We are perpetuating a long tradition of innovation. The collective ‘Monaco, Capital of Advanced Yachting’ umbrella brand is determined to remain a pioneer in this sector and support the industry in its transition”. 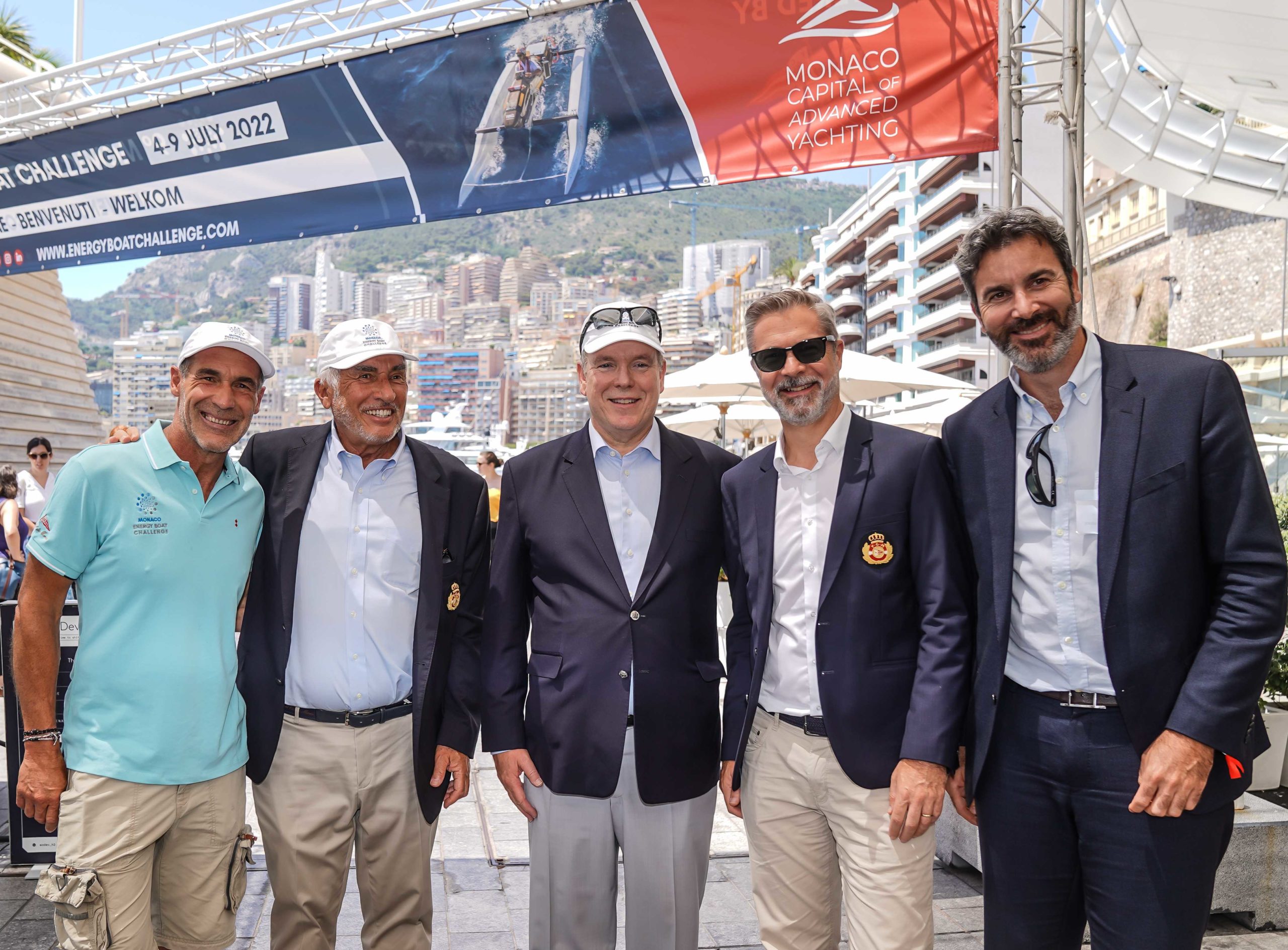 Renewable and alternative energy sources opened debates at the conference, covering a wide spectrum ranging from wind propulsion to batteries via the much vaunted hydrogen and solar power. The focus was very much on R&D to take stock of how these technologies have evolved and assess their potential for the future.  Like computers, systems have become smaller, more powerful and more affordable. Challenges still remain in an increasingly competitive market. “The issue of speed when recharging is obviously a key factor (…) and batteries are heavy and expensive,” explains Rory Trahair, CEO of Vita.   Other alternative fuels such as hydrogen and green hydrogen were also on the agenda. “Regards hydrogen for maritime applications, even though storage remains a key issue and progress is being made on many levels, it’s not mastery of the technology that is lacking but absence of refuelling facilities and regulations that still remain to be drafted, not forgetting that unlike cars, maritime transport is not considered a major issue,” continues Christine Funck, CEO of Aquon Yachts.  It proved the ideal warm-up act before tomorrow’s 3rd Monaco Hydrogen Working Group Round Table, Friday 8th July. Entitled Unlocking hydrogen barriers in the maritime sector: port regulations & economic viability of projects, it’s organised in partnership with Monaco’s Energy Transition Mission, the Prince Albert II of Monaco Foundation and YCM.   Talking about it but actually producing it onboard is another matter, a fascinating subject for the expert guest panellists. After a rapid overview of how solar production systems operate, the surface/yield ratio, battery storage capacity, etc., speakers had a chance to discuss the challenges involved with using these solutions on yachts, particularly in the light of wind power. Most are of the opinion that the problem is not so much technological but rather how to integrate these options into already complex boats. The importance of a design that takes account of these solutions, combining them from an engineering point of view and operating them, remains a crucial factor and inevitably is still more expensive. Even though these systems are becoming simpler and easier to use for owners and captains. 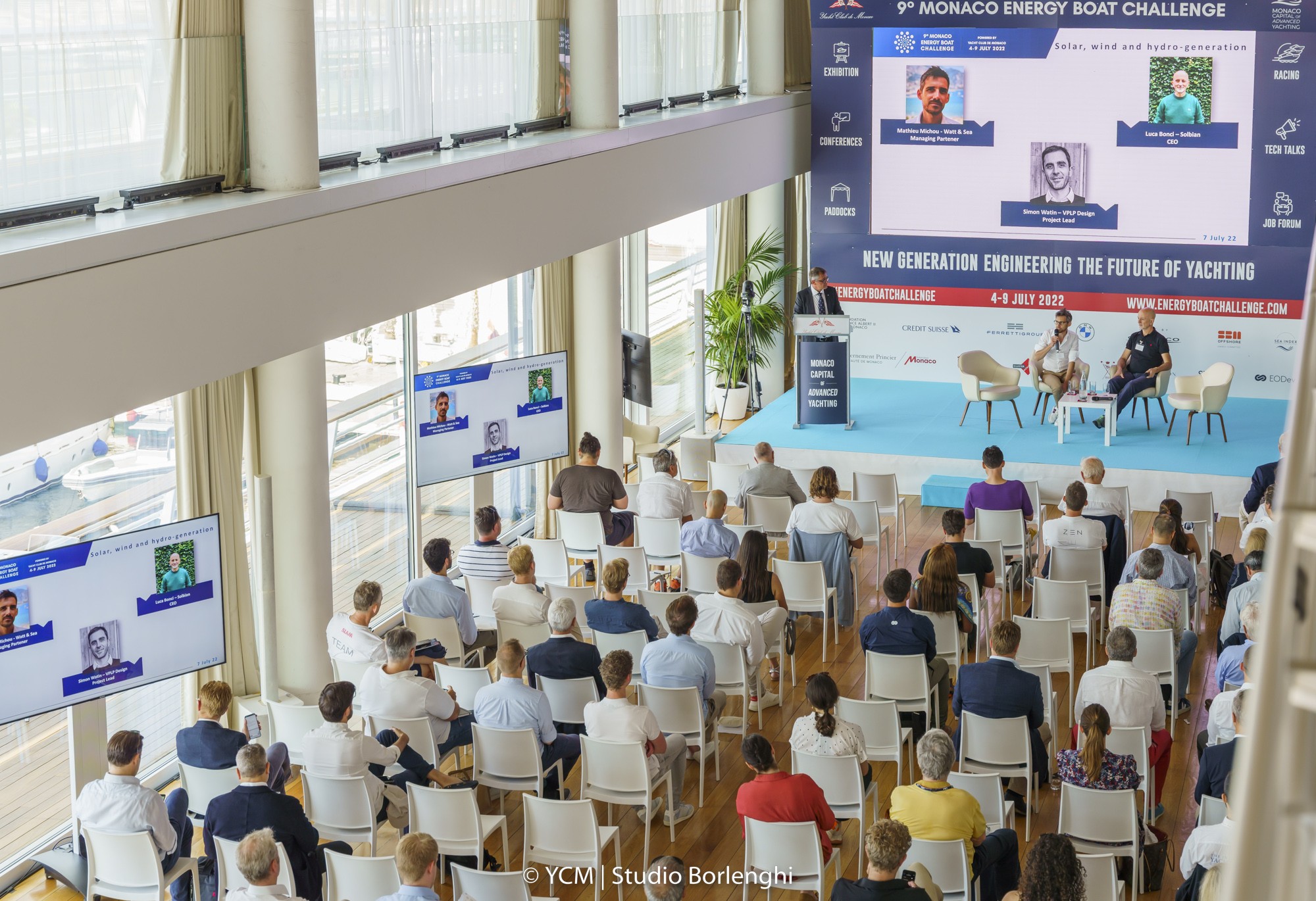 What’s clear is that the Monaco Energy Boat Challenge demonstrates why leisure craft offer a vast experimentation field where progress made is contributing to the maritime sector’s metamorphosis. Managers of ports and marinas, naval architects and shipyards discussed ways to rethink the industry to embrace a strong environmental component, wanting to drive innovation, be it to meet growing demand or anticipate future developments and be proactive, even when the reality of going from R&D to practical certified solutions may take years. Everyone agreed that all operational elements are concerned. Simon Brealey from Lateral Engineering pointed out that the situation is changing fast, thanks in particular to the feedback data available that can be analysed to reduce fuel consumption, highlighting Derek Munro, Project Manager on the sailing yacht Black Pearl built by Oceanco. Thanks also to owners who are increasingly attentive and aware that every initiative adopted counts. The adventurer Mike Horn concluded the debates: “We must stop comparing solutions and find out which is the best before making a decision. They are all good provided they meet the imperative objectives to combat climate change. To get there, there is no other option than for us all to work together. It’s too easy to procrastinate, to make excuses when it’s the sum of all those little things we don’t do that is leading us to disaster. Yachting, the shipyards and owners, have a tremendous opportunity to show us the way,” concluded the explorer who launched INOCEL, a company providing turnkey energy chain solutions with innovative low temperature fuel cells to support manufacturers and help decarbonise our planet.

Find all the talks from the conference on: https://webtv.monacocapitalyachting.com/energy-boat-challenge/conference/

After the demo time for competition

Three categories are again in competition for this 9th edition, all of whom were to be seen in the traditional parade before warming up in their respective events. This afternoon served as a trial run for those in the Solar and Energy classes as they completed qualifying laps for 20 minutes on a 0.5 nautical mile course, their goal being to post the best possible time to clinch pole position in the Championship Race on Saturday 9th July.   In the Solar Class, 14 teams took the start, and 16 in the Energy Class. In the latter, each team is given the same design catamaran hull by YCM and have to select a zero-emission energy solution, design the cockpit and come up with the most efficient and durable propulsion system using a pre-set quantity of energy, 10kWh for this edition. The defending champions from last year are in this class, the Italians on Uniboat representing the University of Bologna: “Called Futura, our boat is powered by three energy sources: solar, batteries and hydrogen,” explains Leonardo Mengozzi, his teammate Marylin Gilbert adding: “Our catamaran has a hybrid propulsion system: two lithium batteries which are charged up at the start of the race, then recharged via a hydrogen fuel cell. Then there are five solar panels supplying two electric engines and two 3D printed propellers”. Meanwhile, contestants in the Open Sea Class (formerly called the offshore class) raised the bar in the YCM Marina during their tricky manoeuvrability tests. A highlight test for boats either already on the market or about to enter it. 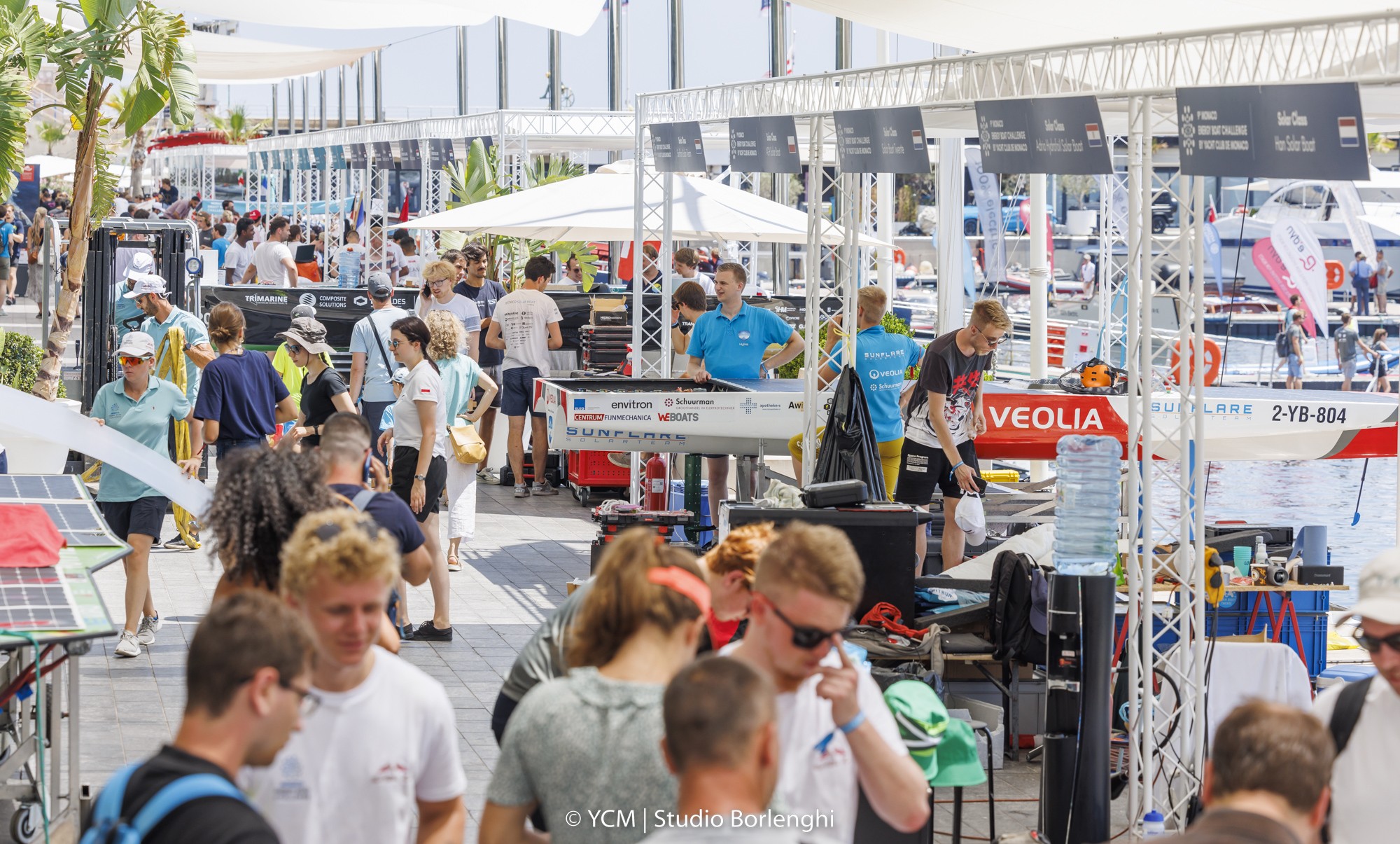 After all the action at sea, the daily Tech Talks slot got underway at 5.00pm for some teams as they put their projects up for scrutiny. All teams have the opportunity to present their project to the public and an international jury and discuss it in open source, sharing information to progress being a key objective of this event. To complete an already packed agenda, organisers held another Job Forum session. Launched 2019, this initiative is in response to growing demand from the yachting industry for highly specialised engineers to bring on new concepts and ideas. Shipyards and companies specialising in electric or hybrid propulsion systems are among enterprises opening their doors to the new generation at this 2022 edition.

As every year, an international jury of experts scrutinises all the boats, and over the nine years of its existence, it’s no surprise to hear that the field has evolved, as Jury President and CEO of EODev, Jérémie Lagarrigue, explains: “At the beginning, there were only solar powered boats but then we added the Energy Class in which boats powered by a variety of propulsion systems, from hydrogen to batteries can compete, but also new ideas can be tried out such as compressed air and kinetic energy”. Alongside him, eight other experts give their opinions on the quality and reliability of projects. They are: Florestan Fillon from the Prince Albert II of Monaco Foundation; Marco Casiraghi, the man behind the Monaco Energy Boat Challenge; Kaitan Borer from the Espen Oeino Int. yacht design studio; Alex Caizergues, four-time kiteboard World Champion and co-founder of Syroco, a laboratory working on the maritime transport energy transition; Mauro Ricci, founder of INOCEL, specialising in high-power fuel cells; Thomas Battaglione, CEO of SMEG; Gilles Vernhet who heads the yacht design division at OCEANCO; and Barbara Amerio from Permare Amer Yacht. Rendezvous tomorrow for another day of sea trials, tests, surprises and exchanges at the Monaco Energy Boat Challenge.

Technology applied on all levels

This week is also a chance to see other new technologies in action, for example the flexible solar [...]
Read more